This has taken a little while for me to get to, but here we go: an FOC ESC for ROV’s. FOC makes low speed motor control possible, which is better for filming because you don’t need big jumpy, noisy adjustments.

Schematic and BOM are done, layout not totally done but its well enough along to know the form factor and power handling. The power it can do is 10-48V input and 30A peak per phase. Not a power monster, but it’ll do significantly more power than the existing T200 can take, in case someone comes out with a slightly larger thruster in the near future.

The software is VESC technology, so it has UAVCAN built in and will probably soon be able to run from the CAN port in the BR2 pixhawk, freeing up all the PWM’s for controlling other things and removing even more wiring. Control options are: UART, CAN, and PWM. 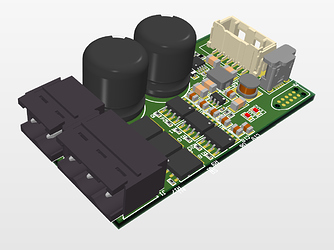 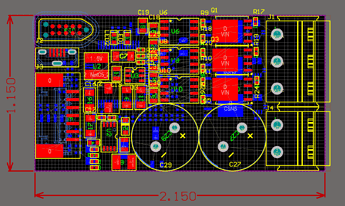 It is designed for packing into the BR2 4" tube. This will take up less tube length than the existing BR2 ESC+wiring. One option is to put a power distro board and plug all the controllers into it so you don’t need to do any power wiring at all. The power connectors are all phoenix style terminal blocks, so its easy to unplug the motors when you want to do maintenance or modify the bulkhead penetrator configuration. 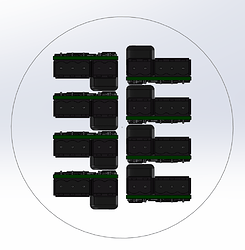 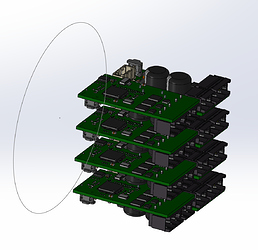 Do you plan to put these on sale sooner or later ?

I was wondering how the FOC low speed motor control works :

to benefit of the low speed motor control feature is it just a matter of plugging these FOC ESC in place of the original ones, or are there also software tweaks to be put in place ?

Will these boards include any user-replaceable fuses ? ( or is there any over-current protection - or any other protection feature- already embedded into the board ?)

These boards don’t have fuses yet, that is a really good idea! Thank you. I will try and fit a fuse on there. FOC requires current control almost by definition. So current is always “under control”, unless something breaks, then you need a fuse.

Normal ESC turn on two phases at a time, one positive, one negative, and the rotor magnets move to align with the active phases. The motor torque changes as the rotor moves relative to the fixed electro-magnetic coil locations. This torque ripple causes vibration and noise, which is reduced by running at higher speeds.

I don’t know if these will go on sale. I’d like to think they will be desirable enough to justify their cost. They will be at least double the BLHeli (blue robotics version) cost, and that’s only if I can make them in batches of a few hundred. We’ll see. I will continue to update the design over the next few weeks and post the results here. After I do a test sample, I will see if anyone else wants to go in with me on a small production batch. I think having FOC would be a cool thing to show off to other ROV enthusiasts

Thank you Nick for replying with so many details , very interesting.

It should be also considered that the thrusters are often being trapped by external objects ( fishing lines , ropes , etc ) , not allowing to the propeller to spin freely , so it would be wise if the ESC" protection " design takes this into account as well .

I would be interested in buying some of them eventually…

The VESC software is very good at detecting stalls and snags. I wouldn’t put my finger in there, but if the prop is truly snagged on a line or seaweed, the software will detect the problem and stop with an error message until you clear the obstruction.

Here’s my concept for how up to 8 FOC ESC and a power distribution motherboard will fit into the BR2 4" electronics tube: 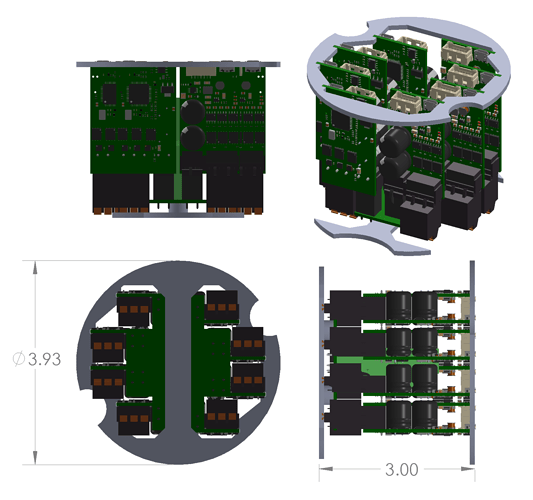 Data is on the opposite side from motor outputs, facing towards the autopilot. Power plugs into the middle of the power distribution board like so: 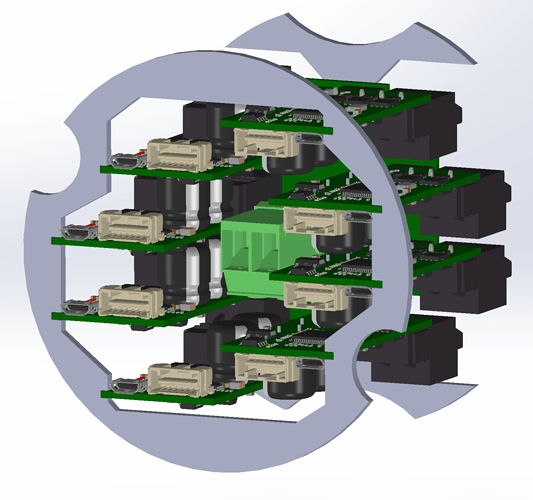 This will free up a few inches of space in the BR2 electronics pod, which was previously used for wiring. I’d like to simplify the data connection, but until the UAVCAN integrability between the pixhawk and the VESC software is better defined, the ESCs are still most likely to be controlled by PWM for the near term.

Finished the prototype! Well, I finished it a week ago but I have been so busy I haven’t got a chance to show it off. This is it running FOC mode on a 30V power supply. The cool part is you can see how good of low speed control it has, even when there is barely any current flowing.